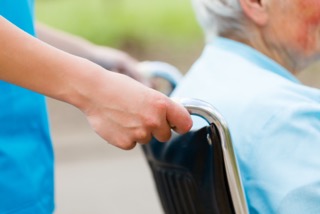 The legal wing of the AARP is suing a California nursing home that refused to readmit a resident whom the nursing home had sent to the hospital. The nursing home's actions are part of growing trend of resident dumping, according to the AARP.

The law treats refusing to readmit a patient after a hospital stay as an involuntary transfer that a resident may appeal. Therefore, Ms. Single asked for a hearing with the California Department of Health Care Services (DHCS), the state agency in charge of monitoring nursing homes. The DHCS ruled in her favor and ordered the nursing home to readmit her, but the nursing home refused to act on the order. As a result, Ms. Single was stuck in the hospital for three months until she was eventually placed in a different facility where she remains separated from her husband.

According to the lawsuit filed by the AARP, the nursing home felt free to disobey the DHCS's order because the state refuses to enforce readmission orders. NPR found that the state fined only 7 percent of nursing homes that were found to have illegally evicted residents and that if the nursing home was fined, the fines were relatively low. The AARP is seeking an injunction to require the nursing home to readmit Ms. Single and to stop dumping residents.

“The problem is that no state agency will take responsibility for enforcing these orders,” said Kelly Bagby of AARP Foundation Litigation in a press release about the lawsuit. “Resident dumping is a growing trend and serious danger to seniors in California. Until the State does something, our only recourse is going to be filing suits like this. Three years ago the federal government told California that it had to enforce these orders, and it has done nothing. The time has come for the State to protect its elderly citizens and stop this abusive practice.”

Hosted and Designed by ElderLawAnswers
All Rights Reserved © 2017
Contact Us

Send us an email and we'll get back to you, asap.